Steve and Jose took me to meet Founder Father Greg Boyle. I also met Hector Vedugo the Associate Executive Director & External Affairs. Father Greg gave me a book he just released in November and signed it. That evening he was receiving an Honorary degree. He had to go to make a speech that evening at the University. He was receiving an Honorary Doctorate in Humane Letters from Chapman University. https://events.chapman.edu/83098

Homeboy Industries received a big donation and wants to create an affordable living block. This way the people taking their re-entry program can live close to Homeboy Industries and in an environment away from their old lifestyle. The reason they picked the location of Homeboy Industries is that there is no gang presence there.

This photo on the left is where they plan to break ground soon.

They want this area to be a prison free area.

The photo below shows where the jail is. This is where many of the prisoners came from during the pandemic. They were released and went straight to homeboy industries to get food and set up. In this photo there is another building that houses the biggest foundation in LA. Homeboy Industries dream is to close the prison and make this are a jail free zone and a rehabilitation area instead.

Steve told me they are planning to expand on their existing enterprises and to acquire and buy running ones such as the hydroponics business. Right now they are balancing hiring and training the most amount of people while still breaking even at their current enterprises. They are also making sure the environment at their enterprises is not too stressful and doesn’t remind their workers of previous bad experiences. They are expanding their catering service and have expanded their recycling plant.

One part of their job venture fund is their recycling plant. This creates jobs and also is beneficial to the environment. Lindsay took me to the new recycling plant. The recycling plant moved to a new warehouse that is 3 times the size of the previous one. They are B corporation certified because they benefit the environment by recycling but also benefit people because they hire ex-gang members or previously incarcerated people. They are R2 certified, this is Responsible Recycling certification they are also ISO45001

Below is a photo of one of the three warehouse halls that they have. This first area is for processing the incoming electrical equipment. They clear the databases with a machine that allows them to clean 64 hard drives a day.

Since they have expanded Brian the founder and Director was able to give everyone a raise. He is also planning to hire 10 new employees. Currently they have 25 employees. The photo on the left shows a machine that breaks down plastic. Brian said his ultimate goal is for the recycling plant to be self-sufficient and self-running.

Homeboy Industries are expanding a lot and fast. They have won a lot of prizes and funding and have a lot of work ahead. Their future plan is ambitious and I hope it creates a shift in LA that the rest of the USA can learn from. I will post updates of their job venture fund as it progresses. 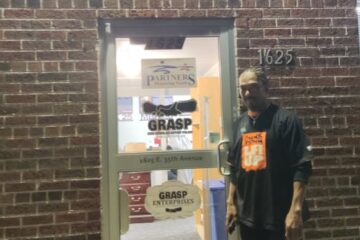 Who is GRASP? Gang Response and Support Project and is a program of Denver Youth Program established in 1991. GRASP is a peer-run intervention program that works with youth who are at-risk of gang involvement Read more… 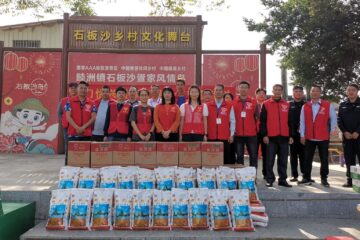 This year our china crew served many families around our local area. They worked with the government to find the people in most need of assistance. We gave them rice, oil and financial assistance. We Read more…